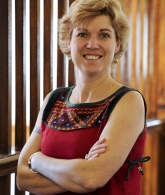 Dr. Helen MacDonald is a social anthropologist with a BA, BCom and MA from the University of Otago in my native New Zealand, and a PhD from the School of Oriental and African Studies, London. Her academic career was given an early start in 1992, when the Department of Anthropology at the University of Otago employed her as a Teaching Fellow to take responsibility for Prof. Peter J. Wilson's undergraduate teaching following an unfortunate accident. She taught courses in Gender & Sexuality, and the Anthropology of Religion including findings from her Masters research on 'Feminist Spirituality in New Zealand'.

She relocated to Cape Town permanently in February 2005 to start a family with her South African partner. For the past five years she has taught undergraduate and postgraduate courses, and supervised students' research and theses at the Honour and Master levels for both the University of Cape Town and the University of the Western Cape.